By John Slater on February 22, 2008 in Branding, Design, Mozilla.com, PlanetMozilla

It’s been awhile since I blogged about the Mozilla.com site redesign, so it feels like time for an update on our recent progress. In order to provide some context, I’ll also take a step back and give a little background about the process and how we’ve approached this project.

First, why redesign Mozilla.com?
* To support the Firefox 3 release…we did the same for the launch of versions 1.5 and 2.0.
* To provide new and improved content about both Firefox and Mozilla.
* To make sure the site continues to evolve and improve along with our organization, our expanding userbase and the Mozilla Project as a whole.

The process so far:
* September 2007: We began soliciting internal suggestions for design agencies.
* October 2007: We sent RFPs (requests for proposals) to six agencies that seemed like good potential fits.
* November 2007: Based on their design abilities, understanding of our brand and history of working on sites with heavy community involvement, we selected the Royal Order and immediately began giving them massive amounts of background info about Mozilla.
* December 2007: The Royal Order created a detailed information architecture plan and did some initial design exploration.
* January 2008: Worked with the Royal Order to refine the design direction; they began designing the site in earnest.

Design background:
The overall design goal is that the site should embody Mozilla’s unique nature, while still being very usable, informative, etc (read more about our design objectives). Having said that, it’s also important that the design not overshadow the key content goals of driving Firefox downloads and educating people about Mozilla. Plus, the site also needs to be easily localized, highly accessible and compliant with Web standards.

After sifting through people’s reactions to the initial design explorations, Paul and I realized that, although the basic layouts were quite solid, they were still lacking a main visual element that met the above design goals. Specifically, we decided that using photography as the main element would make it too difficult to fully represent the global scope of Mozilla, so we and the Royal Order began to focus on illustration options instead.

With regard to illustration style, we wanted hand-created elements rather than slick, vector art in order to represent the fact that Mozilla software is created by a community of people around the world rather being than a faceless corporate entity. The Royal Order recommended an illustration studio called the Delicious Design League, whose style really complemented this concept, and things began to come together.

Our somewhat ambitious goal for the illustrations was that they should abstractly reflect the good things about the Web itself…things like connectivity, collaboration, creativity, etc. That’s certainly not an easy task, but the designers and illustrators have come up with several different concepts – all based around metaphors for networks – that support this really well. The final site will incorporate a few of these, one of which is shown below.

This mockup of the homepage will still receive a few more tweaks before it’s all said and done, but it’s a good sneak peak of what’s to come. As noted earlier, the illustration of the tree is meant to suggest the power and possibility of the Web, as well as the way Mozilla works. And the various handmade elements, such as the pencil-drawn lines and background shadings are all meant to evoke the grassroots, people-powered nature of Mozilla itself. What next?
The design work is still in progress, and we’re busy creating some cool new content like a detailed Firefox features page. From there, we move on to development with our friends at silverorange(who have been closely involved in the entire process), localization (for more on this, definitely check out Pascal’s recent post on the subject) and QA – all with the goal having the site ready for the upcoming Firefox 3 launch.

There’s still lots more work to be done, and I’ll have plenty more to say about the design and the specifics of the new site later. In the meantime, thanks for reading, and stay tuned for more!

By John Slater on February 12, 2008 in Design, firefox, PlanetMozilla

There are still many unsolved mysteries, but his return for the Firefox 3 Beta 3 brings a few more clues about his origins and mission. You guys had some truly excellent theories about the beta 2 page, so I’d love to hear your take on his newest adventures…please leave your thoughts in the comments section (alas, no contest this time though).

Where does he go from here? That remains to be seen… 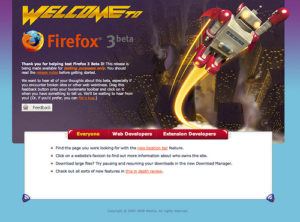 By John Slater on February 5, 2008 in Merchandise, PlanetMozilla 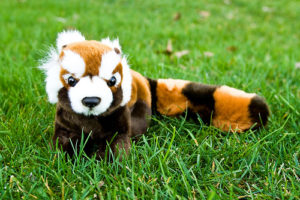 By popular demand, the long-awaited Firefox plushies are now available in the North American Mozilla Store. They’ll be in the International Store in about two weeks, at which point I will triumphantly close this bug.

So, if you can handle this sort of cuteness staring at you all day long, head over the Store and get yours while supplies last. Also, thanks to everyone who voted in the poll and commented on the bug for helping to make this happen.